"As economic growth and opportunity continues in Buffalo, it's important that all residents and business owners benefit from the city's rising prosperity." - Mayor Byron W. Brown 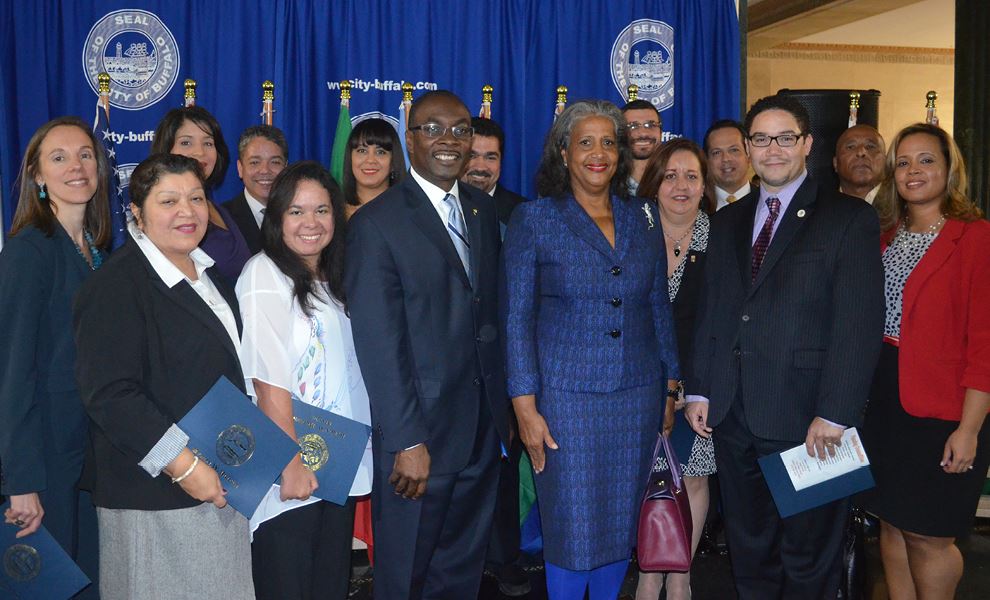 Building a City of Opportunity for all people

Since 2006, Mayor Brown has diversified city leadership, staff and membership on Boards and Commissions. He has hired the most diverse workforce in City government history; incorporated community benefit agreements in most major developments; and continues to connect residents with training for real career opportunities

Mayor Brown is a founding member of The Greater Buffalo Racial Equity Roundtable, which works with the public, non-profit and private sectors to develop strategies which will advance inclusiveness in neighborhoods citywide

In 2015, Mayor Brown launched the Buffalo Opportunity Pledge which enabled individuals, businesses. and organizations to show their commitment to diversity, equity and inclusion. To date, nearly 6,000 individuals, and 400 organizations and businesses, representing over 191,000 people, have signed the pledge.

Under the leadership of Mayor Brown, The Beverly Gray Business Exchange Center opened at 332 East Utica Street, with a mission to enable small, minority- and women-owned businesses within Buffalo to gain access to the resources and business development opportunities necessary to build capacity and thrive.

In 2017, Mayor Brown introduced the City’s Mentor/Protégé Initiative, designed to support the growth of minority- and women-owned businesses. The goal is to grow start-up and small MBE/WBE’s into prime contractors, which will one day provide mentorship to future MBE/WBE’s.

After successfully completing the City’s program, workers will be referred to the respective unions where they will be able to seek permanent employment.

Mayor Brown’s Reading Rules! Summer Reading Challenge is a fun educational program which focuses on building literacy skills for students, better preparing them for the upcoming school year and beyond.

New partnerships with Say Yes to Education and Buffalo Public School’s Summer Camps have enhanced participation in the program, which just launched its 17th season. Since 2006, over 14,000 Champion Readers have completed the program.

The Mayor’s Summer Youth Internship Program (PDF) Mayor Brown has invested over $10 million to provide meaningful summer work experiences to a cross section of youth who reflect the diversity of Buffalo. Since 2006, the program has provided internship opportunities to nearly 24,000 city residents between the ages of 14 and 21. This summer 1,500 youths are taking part in the work, learn and earn program.

The City of Buffalo, under the leadership of Mayor Brown and the Buffalo Common Council, was one of the early financial supporters of the Say Yes Buffalo partnership - a landmark education collaboration. Mayor Brown has invested over $2.3 million in this program which provides wraparound supports for our students, and equips them with tools and resources to earn their college degrees.

Between 2006 and 2013, the foreign-born population in Buffalo increased by 95 percent, and the most recent American Community Survey reports that the city is home to over 22,000 foreign-born residents. The New Americans Study (PDF)was undertaken to ensure that the city remains an attractive destination for immigrants and refugees.